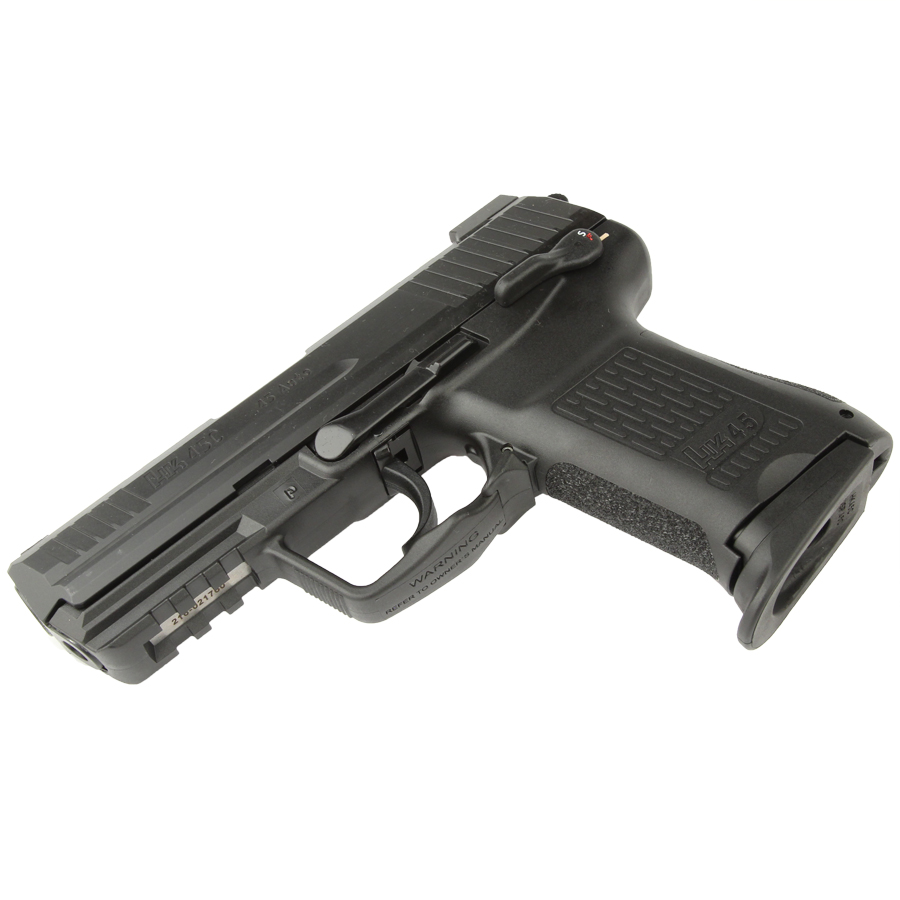 View Detailed Images 1
Ask a question about this product

This product can not be shipped to all locations. Use the form below to detmermine if we can ship this product to your location.

Yes, this product can ship to your location.

Sorry, we can't ship this product to this location.
Average customer rating:
Add your own review


When I placed my order I was skeptical because the price for the elusive HK45C was so reasonable that it almost seemed "too good to be true." I am extremely pleased to say that Top Gun exceeded my expectations with the genuine article, amazingly fast shipping, and great followup customer service!

Unlike some online stores that advertise a model number and then do a bait-and-switch by shipping a lower-tier version of the product, Top Gun sent an immaculate product with three magazines and Tru Dot tritium night sights as advertised. My FFL had the gun in hand and ready for transfer in less than five days after my order was placed. Everything about the transaction was smooth and comfortable.

I took the pistol to the range the same day I received it and put about 300 rounds on the target. The HK45C is a compact version of the full-size HK45, which I also am very familiar with. The compact version shoots every bit as well as the full-size edition. The controls are virtually identical, but the Compact version is noticeably more petite without sacrificing ergonomics and hand fit.

I have huge bear-paw hands, and have cringed at other subcompact versions of H&K pistols because they just didn't fit in my hand and I had to sacrifice an effective grip for fit; not so with the HK45C! It was a real pleasure to shoot, and it's accurate as hell. What's more, the same recoil dampening system that is in the full-size version helps ensure that your followup shots are on target quickly. I had several nice "8" patterns on my target when firing controlled pairs, much to my delight.

The double-action/single-action trigger pulls smoothly. I know some people hate the DA/SA, so your mileage may vary. Personally, I am used to it, so it does not hinder my shooting speed or accuracy. The nice thing about H&K is that both versions of the HK45 can easily be converted to the LEM version trigger (or numerous other variations) with an easily installed conversion kit that can be fit by the owner or by a gunsmith of the owner's choice.

The one slight difference in the compact version when compared to the full-sized version is that it does punish the hands a little more. Emphasis should be on the "little," though. It was not an issue for me. I only point it out because it is noticeably different. Just sayin'.

Moreover, it can be a challenge to find decent holsters for this model of pistol. I don't know why that it, but it just is. I do plan on using it for concealed carry, so I found several good options for holsters—all of them custom. None has arrived yet, however, so I can't make a recommendation. I don't think I'll have any issues carrying this gun concealed despite the gun's size and heft; I carry several other pistols that are larger and heavier, so I'm actually looking forward to carrying it. (I am a big guy, so it will work for me, but I'm not sure how it would play for smaller people looking to use it for CC.)

My bottom line: Top Gun Supply is definitely an online store that I will use again in the future for other purchases, and if you are on the fence about purchasing an HK45C, then I'd go ahead and pull the trigger if I were you (pun intended). It's a fine gun that I look forward to shooting time after time in the years ahead!